byOkechukwu Solomon -November 08, 2019 0
Glo 4G LTE data plan has been around the conner since the first quarter of 2017. Glo LTE service was made available for some states and is yet to be made available nationwide. This pages contain Glo 4G data plan subscription codes and prices. 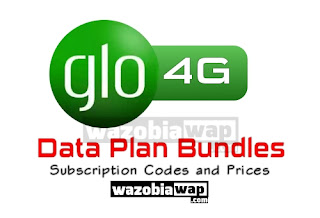 LTE means “Long Term Evolution”. It is the evolution of standards for wireless network after 3G. With Glo 4G LTE you can download 5MB music file in a few second instead of minutes) and you can Watch an Ultra high definition videos with no buffering


How To Activate Glo 4G LTE

For you to be able to use Glo 4G LTE Data Plan, you must must have a 4G LTE enabled smartphone and a Glo 4G LTE SIM which is now available nationwide. To know if your smartphone supports glo 4G LTE, text 4G to 400. You can also swap your old SIM with the new Glo 4G LTE SIM.