byOkechukwu Solomon -January 06, 2019 0
When automobiles giant like Nissan, Toyota and Tesla are focusing on self-driving smart cars, Chinese researchers have taken the future of automotive car driving technology to the level that's beyond your imaginations.
Chinese researchers have built what they claim is the World's First Mind-Controlled Car — that uses nothing but human’s brain power to drive. 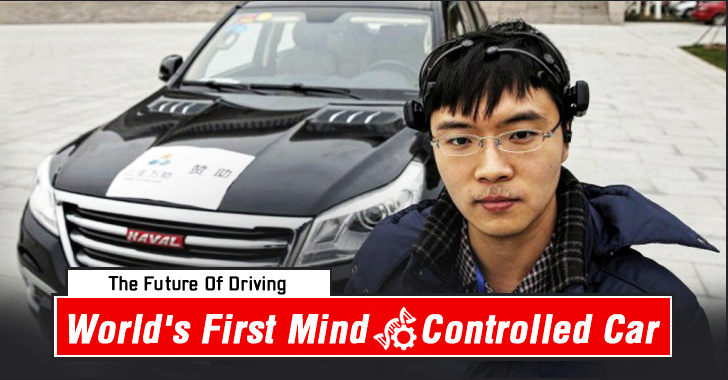 Isn't that sound like a piece of some Sci-Fi movies?


The team of researchers from Nankai University, in the north-east port city of Tianjin, has designed a brain signal-reading headgear instrument that allows a driver to:

without using his/her hands or feet. The team has spent almost two years bringing the mind-controlled car to the reality.

How Does the Mind-Controlled Car Work? Watch in Action

Zhang Zhao, one of the project's researchers, told Reuters the headgear equipment comprises of 16 electroencephalogram (EEG) sensors that are used to capture driver's brain signals when worn.

The brain signals will then be transmitted wirelessly to a computer program, which will then translate those signals to the relevant automotive commands and pass the control commands to the car, enabling car control.

The new technology of self-driving cars is aimed at the betterment of human beings. Soon, it might be possible to integrate brain-controlled technology to driverless cars, like the Google Self-Driving Car (SDC).

Take a look at the video below


However, the technology is very much in progress with the researchers at the phase where their unique car, provided by Chinese car manufacturer Great Wall Motor, can only drive in straight direction currently using brain power.

The brain-fuelled automotive technology was initially inspired by the idea to help physically handicapped people who are unable to steer their vehicles.

Besides helping physically disabled people and assisting in checking pollution, the team says its system is also safe from absent-mindedness because concentration in these newer cars is only needed to change vehicle’s moving status, like changing lanes or turning.
Tags Technology