Whatsapp Set To Extend their Support Until June 30th 2019

byOkechukwu Solomon -January 06, 2019 0
As most of us already know, WhatsApp initially planned on stopping Support for some old devices today, January 1st 2017 but they have decided to postpone it. 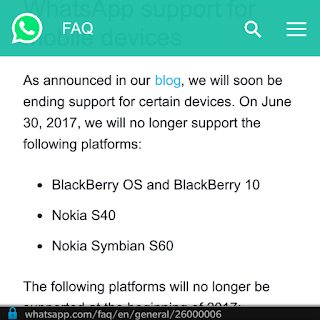 According to an announcement made by WhatsApp ealry last year,

“As we look ahead to our next seven years, we want to focus our efforts on the mobile platforms the vast majority of people use. So, by the end of 2016, we will be ending support for WhatsApp Messenger on the following mobile platforms”

Now, WhatsApp has decided to extend support till June 30th, 2017. So if you happen to be one of those who ought to have been cut off today, you now have 6 more months of grace.

List of devices that will no longer get support from WhatsApp:

So if your current phone falls into one of the categories listed above, then it's time for you to let go of that already obsolete device and upgrade into something more current.
Tags Whatsapp