byOkechukwu Solomon -November 19, 2016 0
Nokia is set to make its big comeback to the smartphone segment in 2017. Even while rumours and leaks have hinted at the company launching a new line of Android smartphones next year, Nokia has only recently broken the silence as to to its intentions. Nokia in its Capital Markets Day 2016 event shared a slide that depicts its agenda for 2017, which includes “Nokia brand’s return to smartphones”. 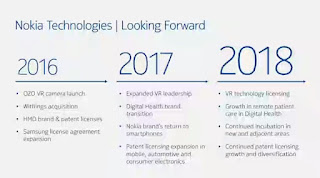 Nokia’s non-compete clause with Microsoft (after the latter took over the company) finishes in 2017. The company is ditching Microsoft’s Windows OS in favour of Google’s Android OS, which has the largest market share among smartphones.

Nokia will not be making smartphones itself, considering that it no more has the manufacturing facilities it did at its peak. It will just be acting as the owner of the brand and its patents, while overseeing the development of new phones,which will be made by HMD global; a new company that was created earlier this year. HMD will be pairing Nokia’s patents and brand with Foxconn’s R&D and manufacturing.

One of Nokia’s first handsets in 2017 could be the D1C. Nokia D1C has already been benchmarked on Geekbench and Antutu. The Antutu benchmark shows the phone to be running on a Qualcomm 430 chipset coupled with an Adreno 505 GPU.


It will be coming with 3GB RAM, 32GB ROM, and will be running on Android 7.0 Nougat. The phone is sporting a 1920 x 1080 pixel screen resolution, comes with a 13MP primary camera and an 8MP front shooter.
Reports have suggested that Nokia might be launching a second device in 2017, details of which are not available at the moment.